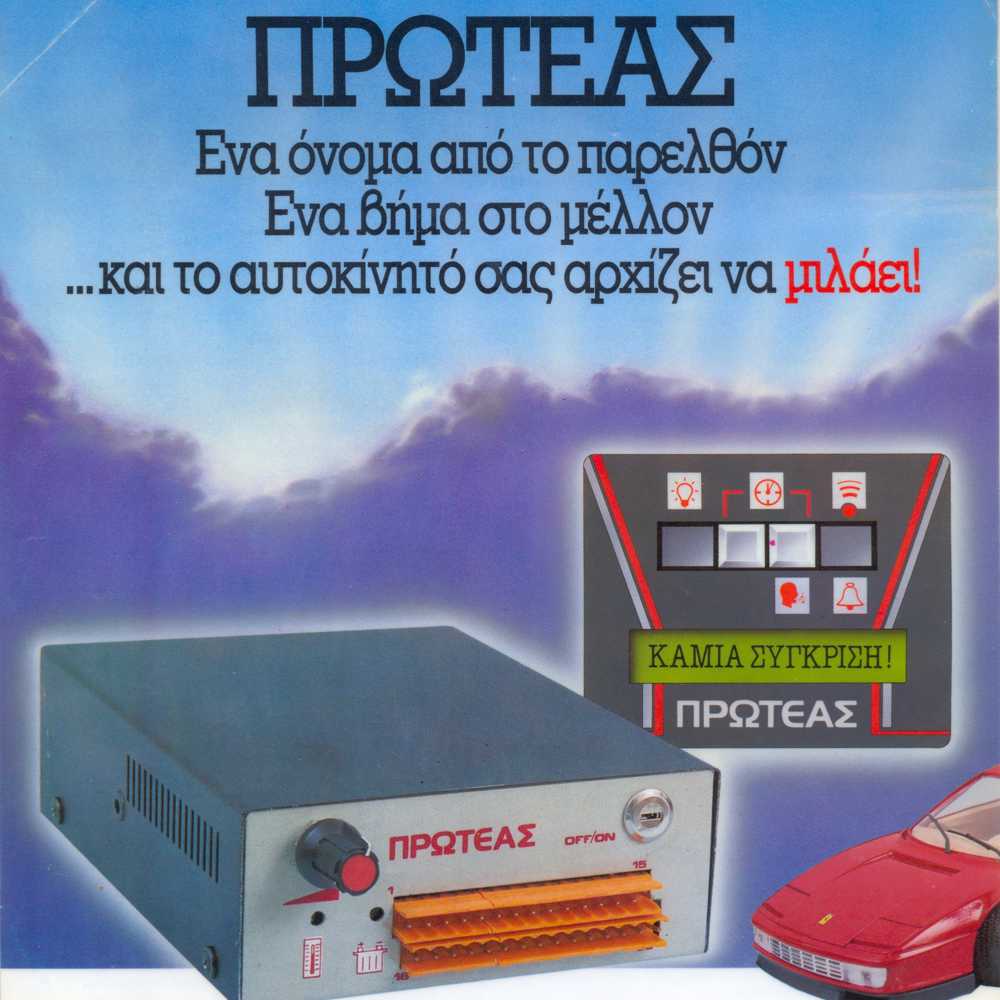 The company is founded with the name “George Panagiotidis – Dimitris Tselepis & Co” by two graduates of Biomedical Technology Department of the Technological Educational Institute of Athens. The distinctive title of the newly established company was “PRO.T.E.M.” and derived from the initial letters of the words “Advanced Technological Applications of Microelectronics” in Greek. The company’s headquarters was located at a small ground floor shop at 99 Makris Street, Aegaleo.

The initial purpose was to construct and commercialize an innovative device, the idea of which was captured by the two partners during the third year of their studies. During the next 2 years they managed to develop it and manufacture a prototype, by using the funds provided by the Technological Educational Institute of Athens in the context of their dissertation. The device was a car computer that detected 16 critical operating conditions and informed the driver verbally and in writing while also being a complete car alarm system. 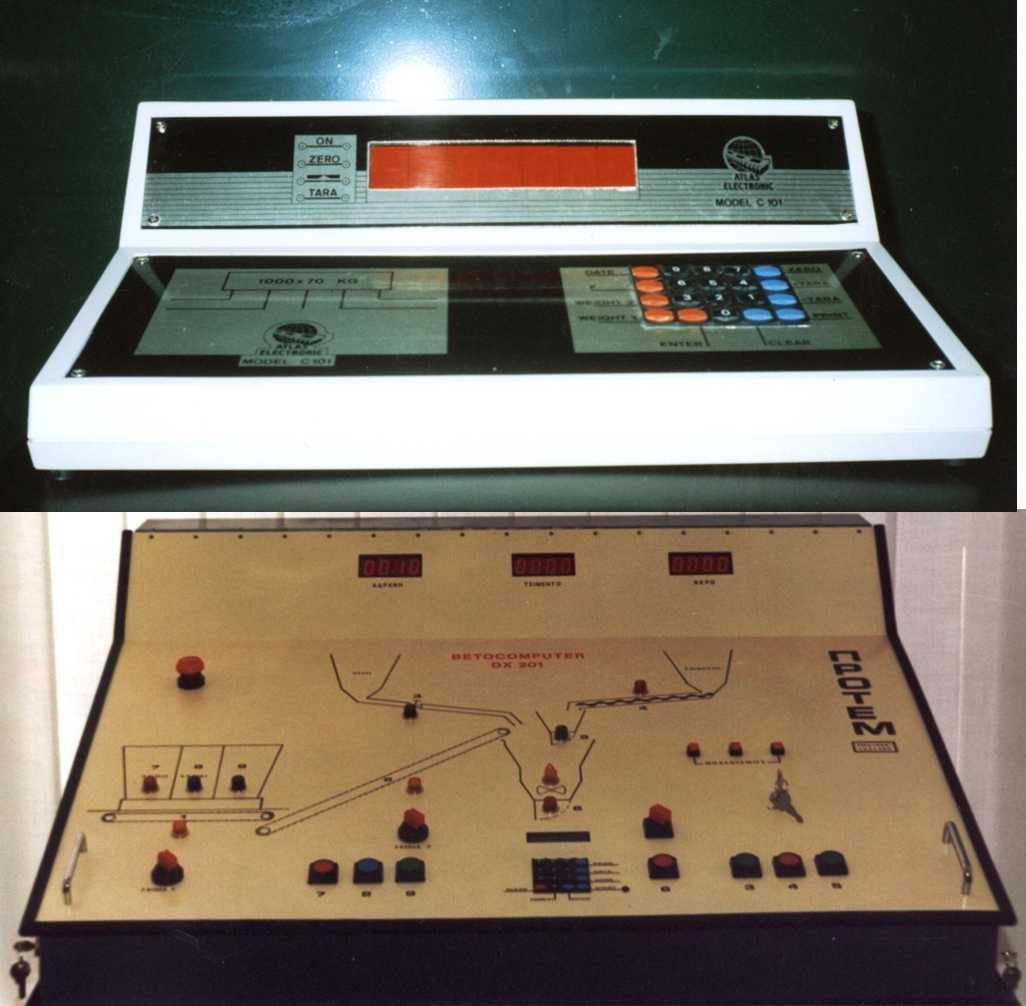 The company tries, with very little equity from a private financier and of course no state aid, to manufacture the first samples in order to be able to come out on the market. The car computer gets patented by the company that began to spread under the trade name "PROTEAS" and finally manages to enter a partnership agreement with a well-known Greek car dealership company.

Despite the successful initial deployment of 300 vehicles, the contract with the dealership is canceled for reasons irrelevant both to the product and its price. At the same time, the emerging retirement of the financier forces the company to turn to developing and manufacturing electronic devices on behalf of third parties. The first electronical weighing indicator for weighbridges and afterwards the first dosing automation for a small dry-mix concrete batching plant located in the countryside are designed as a result. 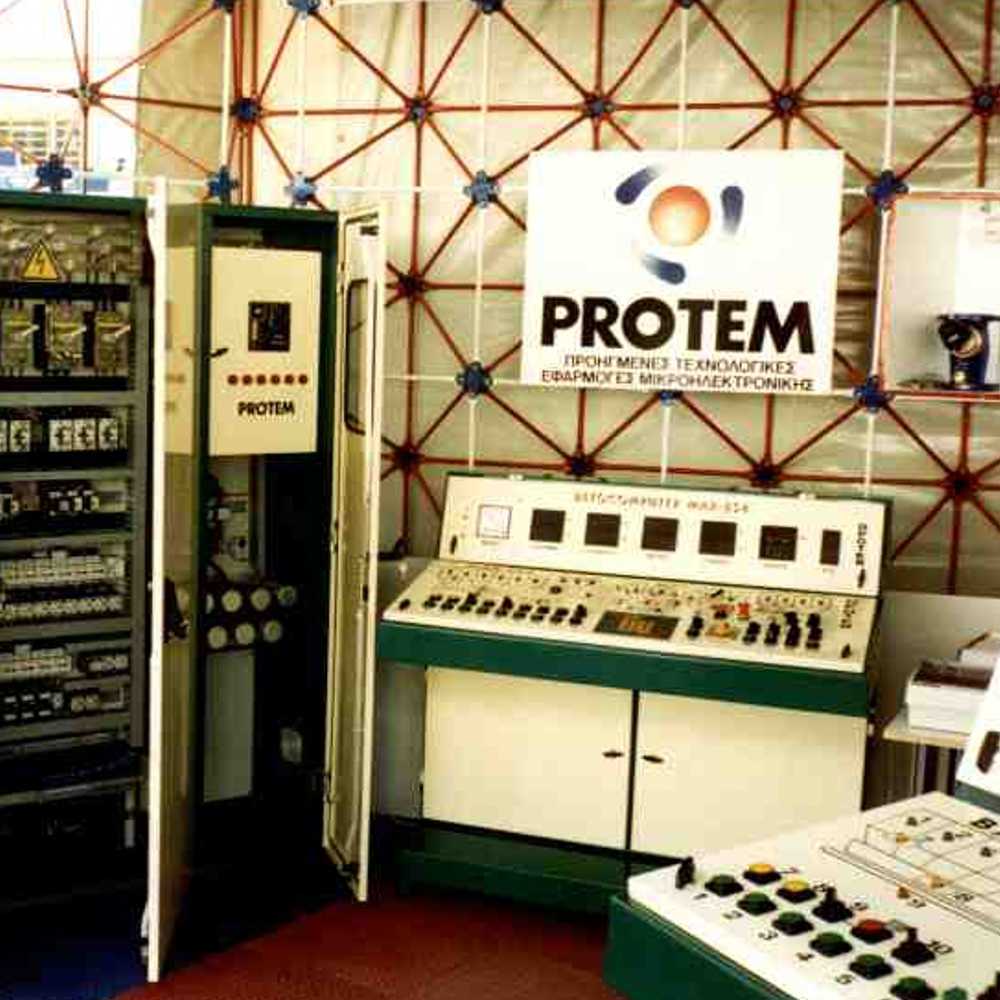 The name of the company is changed to "G.Panagiotidis - D.Tselepis & Co." and its distinctive title becomes "PROTEM ELECTRONICS". The prevailing conditions of competition in the field of concrete industry as well as the pioneering technological automations that the company has begun to design and manufacture allow the rapid market penetration and the spreading of its reputation to the largest companies of that era.

This is how the specialization of the company in the field of Construction Materials Industry began. The culmination of that era was our participation in the Thessaloniki International Fair in 1994, where the standardized products and automation solutions were presented for the first time to the general public. 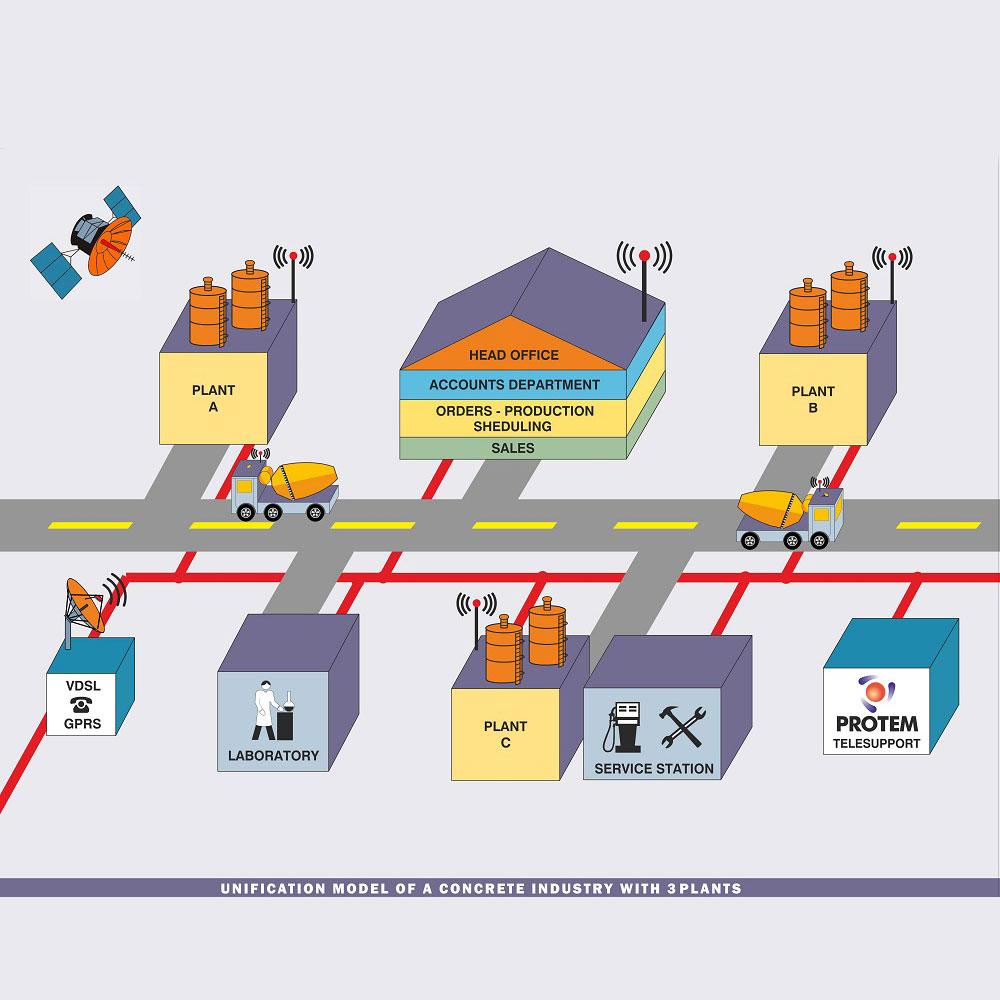 The company is expanding its activities by establishing an in-house software department that starts developing software for the computerization of the Ready-mix Concrete companies. For practical reasons a 2nd company named "A.Divaris- D.Tselepis & Co." is founded and operates with the distinctive title "PROTEM INFORMATION SYSTEMS" at the end of 1996.

The new IT company gradually develops the first specialized ERP system for construction material industries under the brand name Betolink ERP, which remains the same until today.

PROTEM ELECTRONICS implements a quality system in the production and design of its products that ultimately culminates in acquiring of the internationally recognized ISO 9001 quality certificate at 2000. 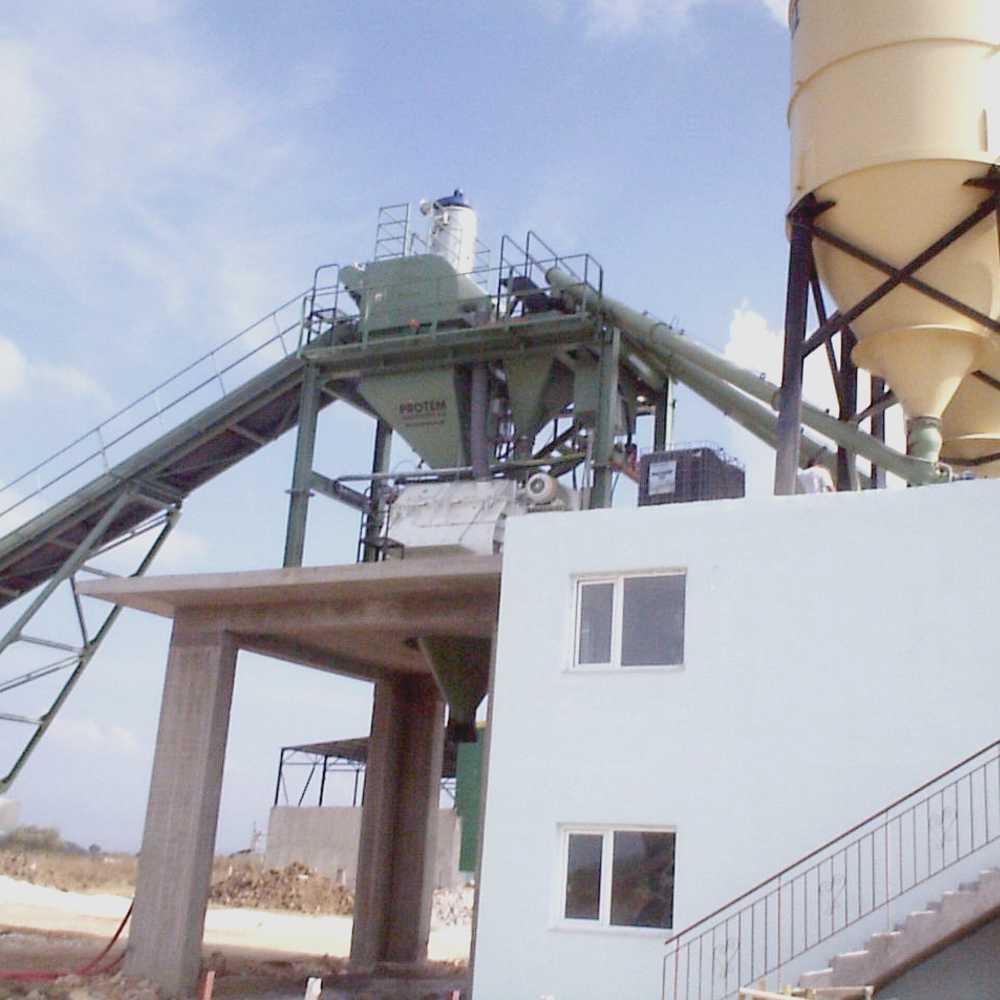 Since the beginning of 2001 the company's client list already numbers 100 companies - industries throughout Greece and is constantly expanding. PROTEM becomes the only company in Greece that manufactures and offers not only automation systems but also Integrated Software Solutions for Ready-mix concrete companies.

A third subsidiary company is founded in 2001, the PROTEM MACHINERY S.A., with the aim of manufacturing and marketing RMC Batching Plants as well as mechanical equipment to the Construction Materials Industries. The common goal of the 3 companies of the group is now to offer complete turnkey solutions both in Greece and abroad. The milestones of that period were the participation of the group at the BAUMA 2001 International Exhibition in Munich, where the PROTEM’s Ready Mix Concrete Production System (RMCPSTM) is presented for the first time to the global audience and of course to the numerous Greek visitors at the exhibition.

In 2002, after long negotiations, the agreement with the TITAN Group (biggest cement industry in Greece) for the automation and computerization of the 25 concrete plants of its subsidiary company INTERBETON, which at that time had plants throughout Greece, was completed.

In 2003, the PROTEM group companies were relocated to new facilities in Peristeri, Attica. It was a five floor, 1,000 m2 building that housed all staff and management and will make the greatest contribution to improving and better organizing the Group's operations for the coming years. 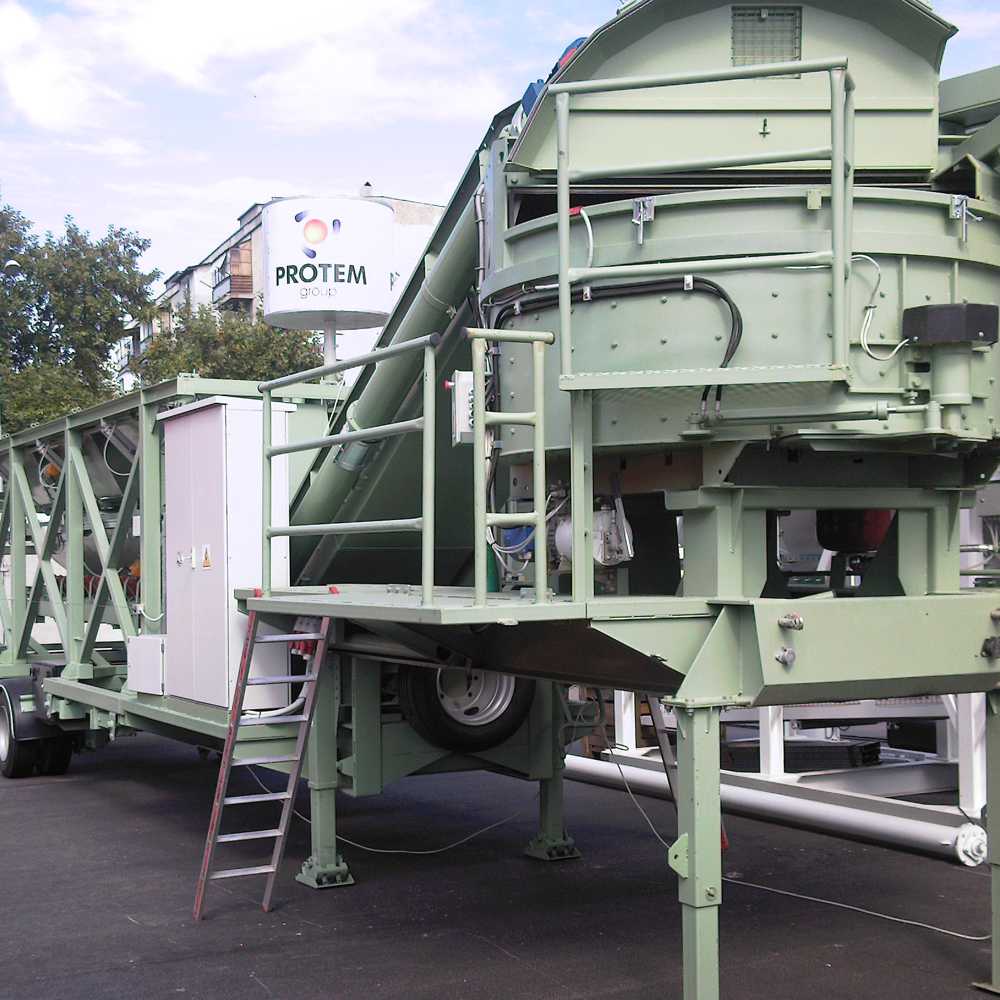 It is the period with the largest growth of the group in all areas of activity.

In 2005, the operation of the PROTEM MACHINERY factory in Mandra, Attica has started and the first integrated RMC Batching Plants are manufactured there. At the same time, exports to neighboring countries such as Cyprus, Bulgaria, Romania, Egypt in combination with the very high demand of the domestic market, result in the exhaustion of almost all the company's production capacity.

In 2007 the merging process of the PROTEM group companies is formally completed. This results in the foundation of a new company, the «PROTEM GROUP SA", which operates to this day as a single legal entity. The company's customers exceed 250, while the company's staff and external partners reach 50 in number. 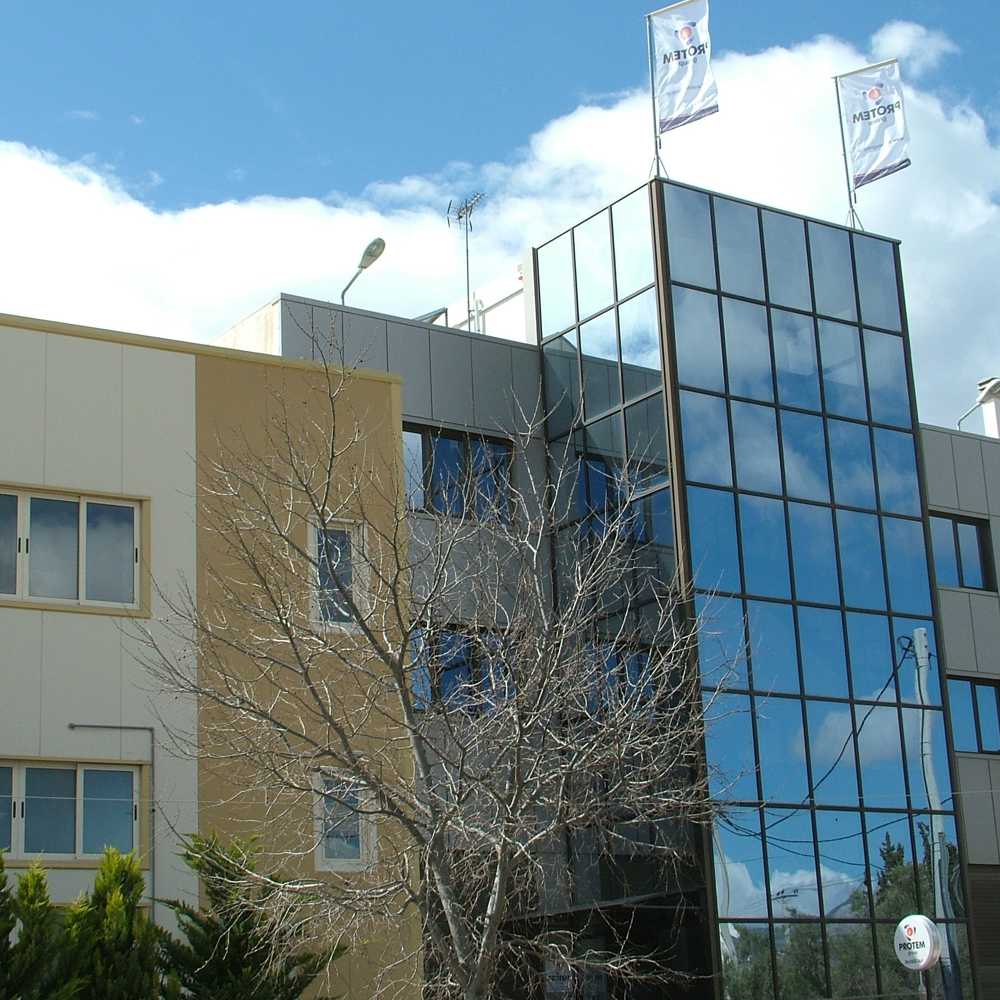 It is the time period on which the economic crisis breaks out in Greece and affects first of all the construction industry. An indicative example is the cement industry where official statistics show the presence of a larger precipitation than it had suffered during the Second World War.

PROTEM GROUP’s activity was affected in proportion to the field and its customer base but manages to balance the new data with methodical movements until 2012.

PROTEM GROUP placed emphasis on exports and at the same time penetrated the African market. Furthermore it has continued to research, design and develop new products and intelligent services for its customers.

In 2010 the company is relocated in new, privately owned premises in the Industrial Park of Ano Liossia, Attica, where it operates to this day. 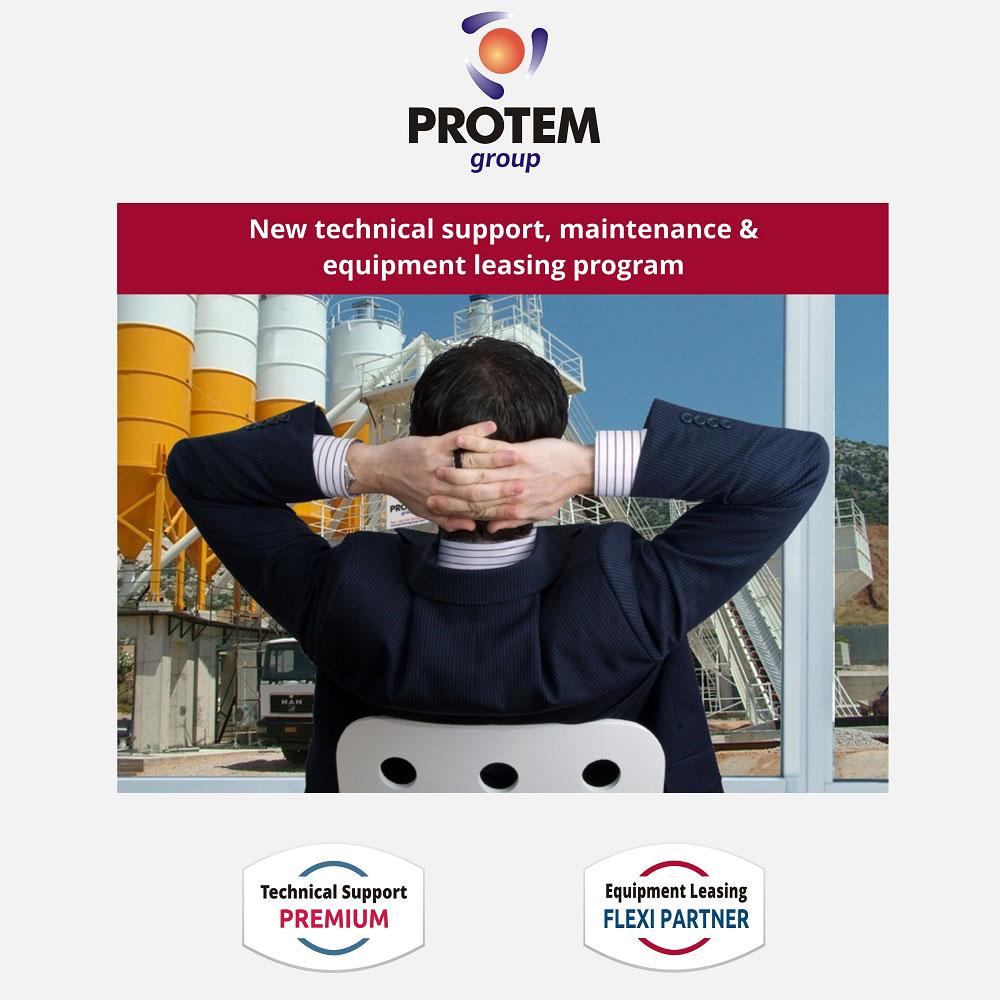 Achievements - The position of the company today

PROTEM GROUP has succeeded in establishing itself rapidly in the Greek market, with its focus on quality assurance at all levels of work, continuous improvements of products and services as well as direct and responsible technical support of our customers.

The most important achievement, however, was reversing a negative superstition against the Greek products which resided in numerous businessmen. PROTEM GROUP has proven in practice there are credible Greek manufacturers and that Greece can truly rely on domestic technology.

Furthermore, the exporting orientation of the company never ceased. On the contrary, in the recent years the company’s R&D department has been constantly developing new automation, software and mechanical equipment for massively distributing products and services through a network of dealers around the world. Our goal and intention is to find and train the appropriate partners in each geographical area so that they can autonomously install and support the equipment that we will supply.

We also created innovative rental programs for our equipment, motivating all those who really want to be modernized but lack the necessary funds to lease our equipment and software solutions.

Do you have any idea of cooperation, you believe that our know-how can be adapted to your own field?
Do you have a special project and are looking for suitable partners to implement it? We are open to new opportunities...

Home Back to top